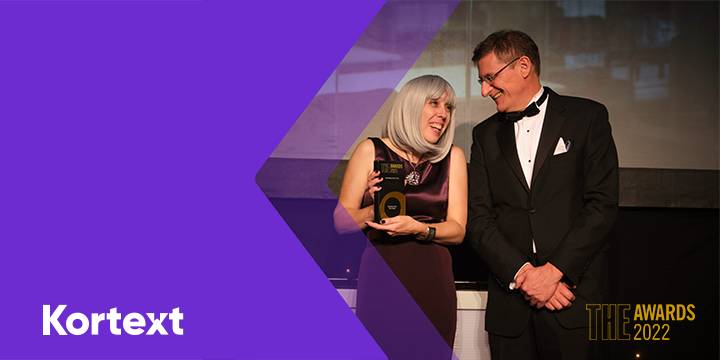 With less than a week to go until the nomination window for the coveted Times Higher Education Awards closes, it would be remiss to not remind you of this and show you what you could be missing out on.

The awards, often referred to as the ‘Oscars of Higher Education’, attracted a record-breaking number of nominations from across the higher education sector last year, making competition fierce.

Seventy-eight institutions and teams were in the running across the 20 categories, with nominees shortlisted from a cache of almost 600 entries, and for the first time in their 17-year history, institutions in the Republic of Ireland were eligible for entry alongside their UK peers.

Throughout the last year, we have put our focus on finding out more about the librarians within the institutions we work with – we confirmed what we already knew – librarians are absolutely excellent, and if we could sponsor an award to honour that, we would… and we did!

This year, we have again partnered with Times Higher Education to sponsor the award for Outstanding Library Team.

We all know libraries are much more than a repository for books and other content, with the nomination asking entrants to explain how their team has personalised the delivery and support of library space, services and content provision.

The award shines a light on how library teams have developed the library’s digital environment to benefit users and used physical and virtual space to provide a complementary, blended service.

Alongside this, those throwing their hat into the ring this year will have to describe how their team’s work improves on standard practice in the sector and addresses new and emerging challenges and opportunities.

Whilst it sounds quite heavy, it’s not too dissimilar to what judges were looking for last year.

Last year, the team who impressed the judges the most were the University of the Arts, London for their impressive response during the pandemic and beyond.

During the 2019/20 academic year, UAL’s Special Collections team pivoted online using collaborative approaches to delivering interactive DIY workshops and creating virtual spaces for communities of practice to interact with each other and the collections.

In their nomination, the UAL team wrote: ‘We have found new ways to embed special collections and objects into the digital learning landscape through projects to create a Zines blog, DIY Materials programme and Creative Archives practice.’

Speaking of their win, Juliette said:

“We were absolutely thrilled!

“We were really honoured we were shortlisted… to be up against such outstanding library teams at Newcastle, Essex, and UCL, we were really inspired by their work um and so I feel incredibly honoured to have actually won it!”

Chris said: “Our submission, which was put together by Rowan involved everyone… these were a lot of what we call ‘bottom-up ideas’. It was people reacting to the situation and coming up with ideas and running with those – it was really fantastic.”

Chris went on to say: “We’re mild-mannered heroes” – an epithet which has been forever engrained in my memory as one of the most appropriate terms I have heard for many of the librarians I have interacted with during my time at Kortext.

Writing a nomination that includes an entire year’s worth of work whilst being coherent can be tricky, especially for people quite literally surrounded by millions of words.

Luckily, Kortext’s very own Ellie Parker has written a very valuable blog on how to write a killer award entry!

Beginning the incredibly useful blog, Ellie writes: ‘It’s one thing to have an amazing story to tell but telling that story can be an art in itself. As this year’s sponsor of the Outstanding Library Team award, we wanted to share our 8 top tips for writing an award-winning entry.

To read on, hit the link here.

If you know you’ve an award-winning entry in the bag already, hit this link to submit your nomination for the Times Higher Education Awards!

Remember, you’ve got less than a week to go – please do not miss out!

The challenges of textbook access, affordability and creating an inclusive learning environment