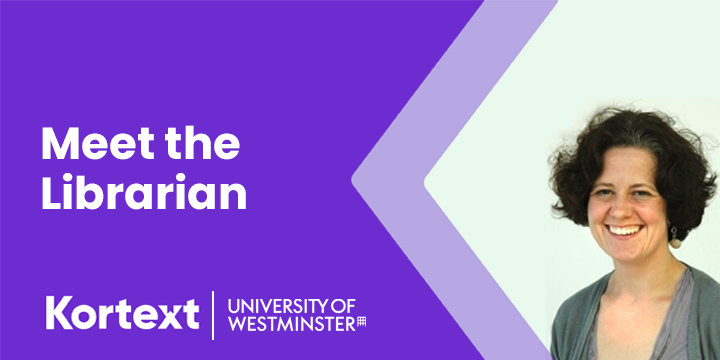 Within the higher education sector, we hear a lot about students, and rightly so, but nowhere near enough about the people who provide them support in many different shapes and sizes – their university librarians.

To prove there’s more to librarian’s than hushing and clichés, we’ll be speaking with a different librarian each month to find out more about them, their role at their institution, and most importantly, the weirdest thing found in a returned book!

Our first guest is the University of Westminster’s wonderful Academic Engagement and Development Manager, Eleri Kyffin.

With an impressive tenure of over thirty years at Westminster, Eleri has seen many things, but first, let’s hear how she got there.

The first question asked to ease us into the interview part of our conversation revealed more than expected and lead nicely to the discovery of how Eleri came to be a librarian.

“It was quite a new subject in those days, and I studied it at an arts campus… It was a lovely course – it was essential social history and economic history.”

If you’re thinking that a degree in Design History isn’t a traditional route into becoming a librarian, it’s understandable; however, it was the elements of Eleri’s studies that she spoke of in her interview that landed her the job, and in the same breath, sold being a librarian to her.

“There was a job at the local college working in the library as maternity cover. I thought ‘why not?’ and in that interview I talked about research and original research; it was that connection.”

Research was an integral part of Eleri’s undergraduate and postgraduate studies, as both relied heavily on original research.

“It was quite a new subject in those days, and I studied it at an arts campus. So, we were the only academic course on campus and it was a lovely course.

“It was using objects to sort of tell the story of time and place and societal changes. That required a lot of original research, so we always had research embedded in from very early stages and had a very close connection with the library.

“The library was very important at teaching you how to use the resources, and this was in the days of card catalogues.

“It was lovely. I loved doing the research! I did a Master’s in History of Design as well, so I carried on with it. In that [job] interview, I talked about research and original research and you know, it was that.”

Speaking about the favourite parts of her role, Eleri said: “I loved working with students. They’ve always been phenomenal.

“The way they often have to cope with things that you have no conception of… I can’t conceive of the things that they have to juggle or do, but sometimes having those chats with them really helps you to understand what students are facing.

“When I was front facing, being able to work with them and just take them to the next level with whatever they’re doing was appreciated, but also you felt that you could have some impact on how they were learning and how they were coping. Knowing that they could come back for more help and more advice as they often did – just trying to help them get to the next stage of learning.”

Often, young people in society get a bad rap, but Eleri dispels those rumours.

During the interview, Eleri spoke with passion about the library and the services they offer, with student support being an integral part. Every element right down to library security has been considered for the benefit of students.

“One of the things that we try to do in the library is to be friendly and approachable because you’re that figure that they might see on a regular basis.”

“It’s just about being compassionate and having a conversation and getting to know them quite well. It got harder as the university got bigger and my role changed a bit, but I’m just saying ‘hello’ to people. It’s just a nice thing to be welcoming, I think.

“Our security guards are amazing people. They’re specially chosen because of their friendly, outgoing and firm-but-fair kind of approach.”

Every job isn’t without its challenges, and I asked Eleri what she does on those days when it’s a little tough.

“It is something very simple, but it is just sitting in a room with my team. We’re all wearing masks – it doesn’t matter, but just being in the same room with them and just hearing a bit of chit chat in the background!”

I was sure that with a tenure as impressive as Eleri’s, she would have seen books returned to the library in all states, and right I was.

“There was a funny smell and we couldn’t trace it… and it was a kipper. So, someone had used a kipper as a bookmark… it was really fossilised.”

The treasure hunt continued to the other end of the spectrum.

“Someone put their cash rent money in a book as a bookmark. They did tell us to look for it and we found it!”

With the rise in digital content, I wanted to find out from Eleri what elements of Kortext she would consider to be most beneficial to students.

“For our students, I think it’s knowing that they’ve got their own copy. You don’t they to fight for one… I think it’s incredibly important.”

Nearing the end of our interview, I asked Eleri what her library-based wish would be if she had a magic wand.

“Well, it might actually be that you don’t have all these different models of access. Just one, not lots of different ways of logging in and using different platforms… simplicity, I suppose.”

As Eleri would have encountered many students and situations throughout her career, I had to ask what universal message she would share with students.

“Don’t be afraid of having fun. I do think it’s so important. We get so caught up in achieving, and doing, and studying.

“It’s difficult at the moment, it is very difficult, so find fun where and if you can.”

And the final, million-dollar question…

As a big reader, Eleri asked if she could cheat and pick a favourite author. As she was an idyllic interviewee, I allowed it.

“Anything by David Sedaris! Maybe my favourite book is the Santaland Diaries.

“I love it! He had a Radio 4 programme which is based around his writing and also some of his diary entries. He’s got a very particular voice… and it’s great because I can now hear it when I read it.”

Join us next month where we’ll be interviewing University of Essex’s Hannah Groom!

If you would like to participate, please email amberl@kortext.com. I am interested in hearing about higher education from the perspective of those in the library as their voice is often underrepresented.

How to land that that post-uni job