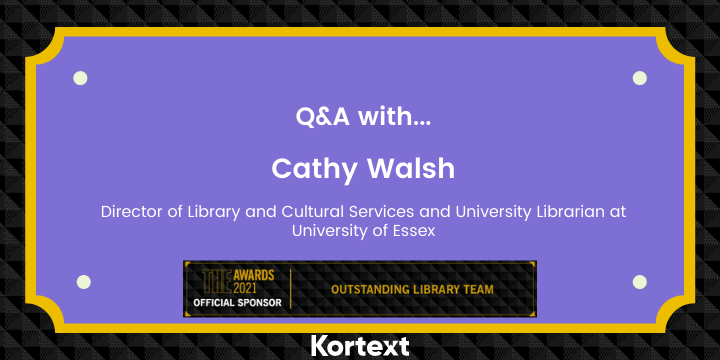 On the day of our meeting, technology was against us, which we thought would have been a detriment to the interview, but it was quite the contrary.

Despite not being able to see Cathy, you could hear the joy in her voice and tell she was smiling as she shared the wonderful work of her team and the collaboration from those at the University of Essex.

Cathy is Director of Library and Cultural Services and University Librarian at University of Essex, one of the teams shortlisted as a recipient of the Times Higher Education Award for Outstanding Library Team of The Year.

Back in April, we announced that Kortext were the proud sponsor of the Times Higher Education Award for the Outstanding Library Team.

Widely known as the “Oscars of higher education”, this year marks the 17th annual THE Awards, with 20 categories in total, covering a wide range of university activity.

Once the nomination window opened, an incredible flurry of nominations flew in, making it clear for all to see just how appreciated library teams are to their institutions.

The awards this year focus primarily on activity during the 2019-20 academic year, and I had the chance to speak with Cathy about Essex’s nomination, and what winning would mean to the team. Read the Q&A below.

Congratulations on the nomination and being shortlisted! How does it feel to have the hard work of the team recognised?

It’s great, really, because I think particularly during the pandemic, people just got their heads down, as it was something that obviously nobody had ever encountered… We didn’t think at the time about recognition; it was just about making things work in a way that supported our students.

Nobody was expecting recognition for that… The feedback [library staff] had from academic staff and students has been hugely valued by them.

We had one academic colleague saying, “I just couldn’t have done this without the library” in terms of putting their teaching online, particularly in 2020. I think it’s wonderful for the team, particularly after such a difficult year when all libraries have been doing amazing things to support their users.

You hit some fantastic targets as mentioned in your nomination. Did your library team work with any other departments in the university to achieve these?

What we found wonderful about it was that we felt like we were genuinely working in partnership with academic staff, and that hasn’t always been the case. We had a lot of support from our PVC in the university, who really championed putting reading online.

We also had a push from our Students’ Union about three years ago when they were saying, ‘we think that the library should provide all essential reading material for all students’ and out of that came the: ‘Well, it has to be digital’ because we couldn’t see another way.

Our content delivery team, who are the people who build all the reading lists, are absolutely amazing. They are quite a small team, and the leader of their team, Hannah Groom, was just determined, and she did a fantastic job with a small number of people, and having those conversations with every department and really saying, “Look, we can’t do this, but here’s what we can do.”

Would you mind sharing about the library’s relationship with academic colleagues?

I think academic colleagues always think generally well of the library, but we don’t always have these really strong, constructive conversations.

What came out of that also was a recognition that library support is not just about support, it can be about helping to shape the curriculum to some extent in terms of, ‘well look, we’re not going to have access to these printed resources, what are we going to do instead?’, and that led the team to looking at some hybrid resources.

So bringing those together, it really highlighted for academic staff that they could do things in a different way, because the resources would enable them to. I think the content delivery team has done much more than just supply what academic colleagues were asking for, it was much more, helping them to shape the delivery.

We are now having more regular meetings with more senior colleagues in departments about the longer-term development of collections and content and working with the content delivery team on that. It’s really helped us and we’re just keen that we don’t lose that momentum and can continue to build on that relationship.

You mentioned wanting to keep the momentum going. What steps are you taking to ensure that the momentum doesn’t dip in the new normal?

In very difficult circumstances, we were actually able to move things forward in a way that might have taken several years.

We have a new Assistant Director for Academic Research Services who joined us during the pandemic. His team has been working with all departments to establish a termly meeting with the heads of department with a standard, strategic agenda.

We’re looking at the role print plays because we’ve found lots of academic libraries have seen the NSS scores for the question about library resources drop, as we have, often because the doors have been closed and because people couldn’t necessarily access the physical and the print resources for some aspects of work.

We also have a library advisory group – that’s a group of staff and students – which we started about five years ago. We take a workshop approach with various themes. We’ve actually got a whole week of activities coming up soon, around getting a deeper understanding of how people use print resources, and the relationship with digital, having that conversation with our students as well as our academic staff.

So, I think there’s a number of things, which we hope will help us to maintain momentum.

What would it mean for you in the team to win the award this time?

All teams have done amazing work and pulled out all the stops. I think it really shows that our commitment to our students and our academic colleagues is genuine, it is what drives us and I think the evidence has been there right across the higher education sector.

For the team, it would be a crowning glory because they have worked really hard… I think in particularly difficult circumstances, it’d be amazing for the recognition. I know, they’re very excited about being shortlisted!

To receive a national award would be fantastic. It’ll be great actually to face the rest of the university and say: “look, we’ve been telling you how great we are. We are actually recognised as being amongst the best in the UK!” That would be absolutely fantastic for the team.

The awards ceremony will be taking place on Thursday 25th November in London. Return on Friday where we’ll share who’s won the coveted title of Outstanding Library Team of the Year.

Best of luck to all shortlisted nominees!

Bridging the gap between collaboration and remote learning